Bring me the head of John the Baptist – and Alfredo Garcia... 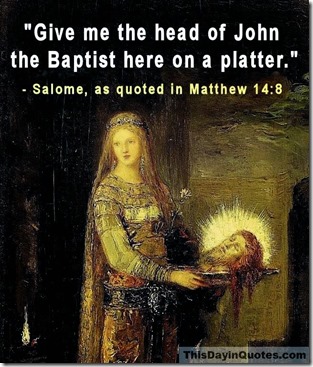 , starring Warren Oates, is one of my favorite movies from the Seventies.

The film’s title comes from a line in the movie said by the main villain El Jefe (played by actor Emilio Fernández).

When El Jefe finds out his daughter has had a secret affair with his gang member Alfredo Garcia and is pregnant, he puts a hit out on Garcia, saying: “I will pay one million dollars. Bring me the head of Alfredo Garcia!”

That second line is a modern descendant of a famous Biblical quotation associated with the date August 29.

About 2,000 years ago, according to the Bible, a rabble-rousing, hair-shirt-wearing, locust-and-honey-eating preacher known as John the Baptist mightily annoyed King Herod and his family.

Herod had married his own niece and they had a daughter.

Righteous John publicly denounced the marriage as incestuous and against Jewish law.

Herod threw John in prison. Not long after, the king threw himself a birthday party.

The featured entertainer was his daughter. 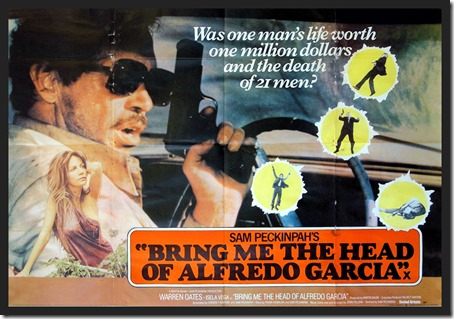 She’s not named in the Bible, but historical accounts say she was Salome – the one known for the exotic “Dance of the Seven Veils.” Salome apparently tripped the light fantastic in an especially pleasing way at Herod’s birthday bash.

He told her he wanted to reward her by giving her anything she wanted.

At the suggestion of her mother, Salome replied: “Give me here John Baptist’s head in a charger.”

That’s the original King James Bible version of what she said, in Matthew 14:8. It uses the old English word charger, meaning a large platter or dish.

This led to the English idiom “to bring (or have) someone’s head on a platter,” which is a figurative way of suggesting that someone will be punished severely.

Of course, in the Bible story (and in the movie Bring Me the Head of Alfredo Garcia) it was a literal punishment.

Herod gave Salome her wish, by ordering John’s head to be cut off and brought to her on a platter.

In the centuries since then, August 29 has been the traditional date the Catholic, Anglican and Eastern Orthodox churches have used to commemorate the beheading and martyrdom of John the Baptist.

But he does have a special place in the hearts of Sam Peckinpah and Warren Oates fans like me.