“Kill them all and let God sort them out.” 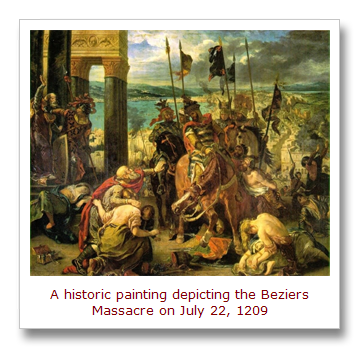 In 1209,
Pope Innocent III decided it was time to crack down on followers of a religious sect that had become popular in Southern France.

Originally called Albigensians, they came to be more widely known as the Cathars.

Cathars were Christians. But they rejected the authority of the Pope and other key aspects of Catholicism, so they were deemed heretics by the Catholic Church.

This apparently didn’t matter much to most people living in the French town of Beziers.

Catholics and Cathars had lived there together for many years in relative harmony.

On July 22, 1209, they were celebrating the annual Feast of Mary Magdalene together, a religious holiday observed by various Christian religions.

Suddenly, the festivities were cut short when an army of “Crusaders” sent by Pope Innocent III  showed up outside the walls of the town.

The military leader of the army was Simon de Montfort, a French nobleman highly motivated by the Pope’s promise that he could keep the land of any heretics he killed.

The Crusaders were accompanied by an official representative of the Pope, a French Cistercian monk named Arnaud Amalric (also variously referred to as Arnald Amalric and Arnauld-Amaury).

De Montfort demanded that the leaders of Beziers turn over the town’s Cathar heretics to him. They refused. The Crusaders attacked.

According to accounts written decades later, as the attack began, a soldier asked Amalric how they would be able to tell which Beziers townspeople were Catholics and which were Cathars.

“Kill them all. God will recognize his own.” 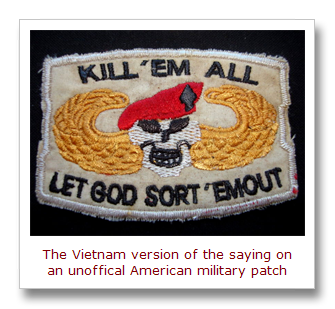 It eventually came to be most commonly paraphrased as:

“Kill them all and let God sort them out.”

Scholars have debated whether Almaric actually said anything like those words.

But there’s no question that they reflect what happened that day.

De Montfort’s army killed virtually every man, woman and child in the town — estimated to be as many as 20,000 people — and burned Beziers to the ground.

The Beziers Massacre was just one of the first of many atrocities that occurred during the Albigensian Crusades.

Over the next four decades, roughly a million more people were killed during those bloody religious conflicts.

That “witticism” was put on unofficial Special Forces military patches, pins and t-shirts that are now sold as “collectibles” on eBay.

It’s disconcerting that anyone can blithely talk about killing innocent people and letting them be “sorted out” later.