“I love it when a plan comes together.” 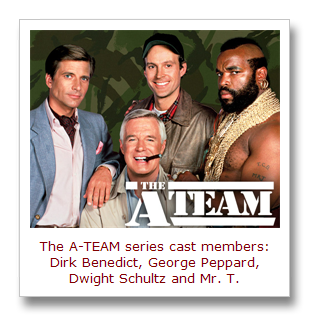 You may or may not be a fan of the ‘80s TV series The A-Team, but you probably know the famous catchphrase from the show:

“I love it when a plan comes together.”

It was used frequently throughout the show’s five-season run from 1983 to 1986 by the team’s cigar-chomping leader, Colonel John “Hannibal” Smith, played by actor George Peppard.

Peppard first uttered the line in the 2-hour pilot episode “Mexican Slayride,” which originally aired on January 23, 1983 as an NBC “Sunday Night Movie.”

The first regular one-hour episode of The A-Team aired the following week, on January 30, 1983, following the Superbowl.

After that, the show moved to a Tuesday 8pm time slot.

Other members of Hannibal’s team of good-guy mercenaries included: Templeton “Face” Peck, played by Dirk Benedict throughout the regular series but by Tim Dunigan in the pilot; “Howling Mad” Murdock, played by Dwight Schultz; and, Boscoe “B.A.” (for “Bad Attitude”) Baracus, memorably played by Mr. T.

Naturally, Peppard’s catchphrase in the A-Team TV series was resurrected and used several times in the A-Team movie released in 2010, which starred Liam Neeson as Hannibal Smith.

Some people assume that the A-Team series is also the origin of another well-known catchphrase — Mr. T’s famous line “I pity the fool.”

In fact, that line was first used by Mr. T in the 1982 movie Rocky III, in which he played Rocky’s boxing opponent “Clubber” Lang.

According to the A-Team experts (i.e., hardcore fans who have watched and rewatched the entire series) Mr. T never said “I pity the fool” in any of the 98 episodes of the show.

I’m willing to take their word for it.

I did enjoy watching The A-Team back in the 1980s and I still watch reruns of the show occasionally on one of the retro TV channels.

But I’m not quite up for watching all 98 episodes and paying close attention to every line. So, for now, I’m accepting the conclusion of the A-Team experts on the the question of whether Mr. T ever said “I pity the fool” in the series.