If you were watching David Letterman’s show on September 18, 1985, back when it was still on NBC and called Late Night with David Letterman, you saw a bit of TV history being made.

On that night, Letterman introduced his first “Top Ten” list.

Early in the show, he commented on that fact that “top ten” lists seemed to be popping up everywhere in the media.

He showed an example in the latest issue of Good Housekeeping magazine, then said, in his trademark deadpan style:

“Because these things are so popular and such solid network television programming material, we’ve decided tonight...we’re gonna start our own top ten list. And, tonight, I think we got a pretty good one. Tonight, will be Late Night’s ‘Top Ten Words That Almost Rhyme with ‘Peas.’”

After that, Letterman’s “Top Ten” segment became a regular and hugely popular feature of the show.

He took it with him when he moved from NBC to CBS in 1993, where it’s officially called the “Late Show Top Ten List.”

And, although Letterman’s first Top Ten list did not create a specific quote or catchphrase, it did create a famous, familiar and oft-copied format.

Letterman introduces the list with some funny comments. He reads the title of the list. Then he reads the list backwards starting with ten and counting down to number one, frequently with the help of a guest who is on the show or who pops in just to read the list. (Some of my favorites were Homer Simpson, Bruno and Britney Spears.) 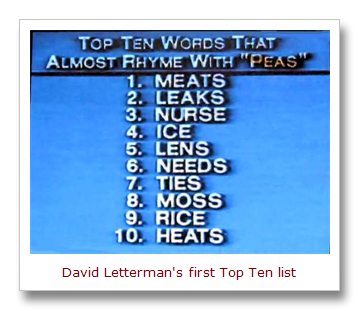 Of course, it’s usually a lot funnier to watch the Top Ten segment than to read it. You never know what quips Letterman or bandleader Paul Shaffer will throw in or what celebrity might show up to read the list.  And, it all started exactly 25 years ago today, with the very first Letterman Top Ten List, the “Top Ten Things That Almost Rhyme With Peas.”

Here they are, in descending order:

And, the number one word that almost rhymes with peas is (drumroll):