“A little rebellion, now and then, is a good thing” for “the tree of liberty”… 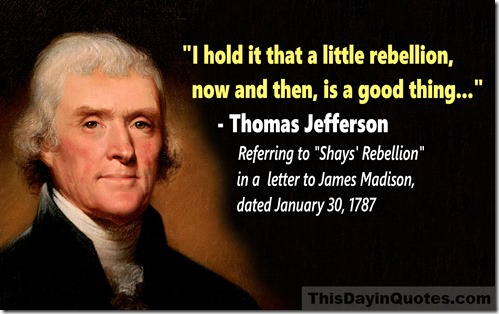 In 1786, the new democratic government of the United States of America wasn’t quite working out like some Revolutionary War veterans had expected.

Many had not been paid for their military service in local state militias or the Continental Army as promised.

And, when they went back to their family farms, they found they were subject to heavy new state taxes imposed to help pay off government war debts owed to rich merchants.

Many farmers who couldn’t afford to pay their taxes and other debts had their farms seized and were sentenced to serve time a debtors’ prison.

In response, angry veterans in Massachusetts began joining together to take over and shut down local courts. One group of vets tried to take over the Springfield armory.

This mini-revolt — called “Shays’ Rebellion” after one of its leaders, Daniel Shays — was quickly and forcefully crushed by the Massachusetts state militia, under orders from Governor James Bowdoin.

In the confrontation at the Springfield armory, four Shaysites were killed and twenty wounded. The rest fled.

Eventually hundreds were rounded up and indicted.

Some were sent to prison. Eighteen were sentenced to be hanged, as recommended by Founding Father Samuel Adams. 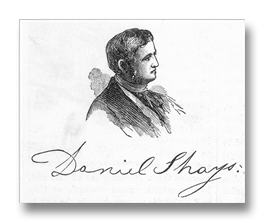 Drawing a somewhat arbitrary distinction between governments with and without kings at the top, Adams said:

“Rebellion against a king may be pardoned, or lightly punished, but the man who dares to rebel against the laws of a republic ought to suffer death.”

Adams’ fellow Founding Father Thomas Jefferson, who was in Paris at the time, agreed that there was a distinction between a monarchy and America’s new system of government.

However, his view of the anti-tax uprising in Massachusetts was less harsh.

In fact, two of Jefferson’s most famous (and arguably most misused) quotations are from letters he wrote about Shays’ Rebellion.

One of those oft-cited quotes — “I hold it that a little rebellion, now and then, is a good thing” — was in a letter he wrote to James Madison on January 30, 1787.

Jefferson said in the letter that a democratic government like America’s “has a great deal of good in it. The mass of mankind under that enjoys a precious degree of liberty and happiness. It has its evils, too, the principal of which is the turbulence to which it is subject. But weigh this against the oppressions of monarchy, and it becomes nothing.”

“I hold it that a little rebellion, now and then, is a good thing, and as necessary in the political world as storms in the physical. Unsuccessful rebellions, indeed, generally establish the encroachments on the rights of the people, which have produced them. An observation of this truth should render honest republican governors so mild in their punishment of rebellions, as not to discourage them too much. It is a medicine necessary for the sound health of government.” 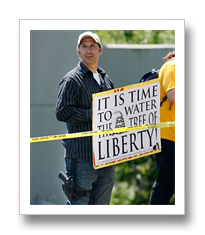 “The tree of liberty must be refreshed from time to time with the blood of patriots and tyrants.”

Both of Jefferson’s famous quotes about Shays’ Rebellion are still frequently cited by people who are “mad as hell” about something the government has done.

Today, relatively few people actually believe that the sentiments Jefferson expressed should be interpreted and acted out literally, through a violent revolution.

Some anti-gun control protesters who carry signs referring to Jefferson’s “tree of liberty” quote apparently do.

So, apparently, did the anti-government “rump militia” members who occupied the Malheur National Wildlife Refuge.

I wonder how many of them know what happened to the Shaysite rebels Jefferson was referring to when he wrote that line.