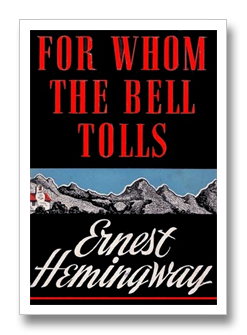 On October 21, 1940, Ernest Hemingway’s novel For Whom the Bell Tolls

It’s a classic war story about an American, Robert Jordan, who goes to Spain to fight with anti-Fascist rebels during the Spanish Civil War. Along the way, he falls in love with a rebel girl named Maria.

The title of the novel is taken from a famous line written by British poet John Donne: “...never send to know for whom the bell tolls; it tolls for thee.”

Those oft-quoted words are from Donne’s book Devotions upon Emergent Occasions, published in 1624. They come at the end of a passage that includes another famous quote by Donne: “No man is an island.”

Hemingway’s novel For Whom the Bell Tolls was a huge bestseller that generated some famous lines of its own.

The first comes in Chapter 7. As Robert and Maria are about to kiss for the first time, Maria asks the somewhat unbelievably naïve question: “Where do the noses go?”

, in which Ingrid Bergman, as Maria, says it to Gary Cooper, playing Robert Jordan.

In Chapter 13 of the novel, there’s another famous quote: “But did thee feel the earth move?” (Hemingway used “thee” and other antiquated terms of speech in the novel supposedly as a way of translating what was being said in Spanish.)

Jordan poses this question to Maria after they have sex. According to a flowery previous paragraph describing their coupling, it did move for Jordan. He supposedly “felt the earth move out and away from under them.”

Maria answers Jordan’s question in the affirmative. Later, when one of the rebel leaders asks Maria if something happened between her and Jordan, she says simply: “The earth moved.”

When the novel was published in 1940, the use of the phrase “feel the earth move” was not a yet a humorous reference to enjoyable sex.

But the use of the phrase in both the book and the movie made it familiar enough to make it that – and to give songwriter-singer Carol King the title and refrain of her hit song “I Feel the Earth Move” (1971).

In Chapter 43 of For Whom the Bell Tolls, there’s another oft-quoted line: “The world is a fine place and worth fighting for.” 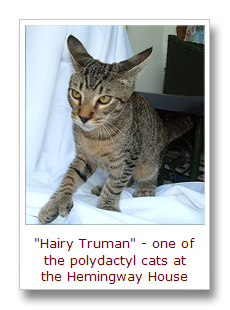 It’s included in many books of quotations and one of its many admirers is Senator John McCain. He used the variation Worth the Fighting For

as the title of his autobiographical book published in 2003.

Ironically, McCain’s campaign nemesis, President Barack Obama has named Hemingway’s For Whom the Bell Tolls as one of the books that have inspired him.

I live near Key West, where Ernest Hemingway lived from late 1920s to the late 1930s.

He worked on some of his most famous novels and stories there, including For Whom the Bell Tools, A Farewell To Arms, To Have and Have Not

and the short story “The Snows of Kilimanjaro

Hemingway’s former house in Key West, now called the Hemingway Home and Museum, is a big tourist attraction that is famous for the dozens of “polydactyl” (six- and seven-toed) cats that hang out there.

They’re descendants of the polydactyl cats Hemingway had there in the Thirties.

As a Keys resident, I should probably like Ernest Hemingway more than I do. But the truth is his books and stories never really made the earth move for me.

Nor do I find it easy to overlook the way he treated his wives, lovers and kids.