Hanging … It concentrates the mind wonderfully. 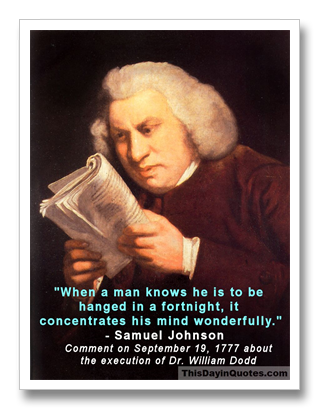 Many of the famed witticisms uttered by British writer, lexicographer and wit Samuel Johnson were recorded for posterity in a journal kept by his admirer and friend James Boswell.

Boswell used entries from the journal as a foundation for his classic biography, Life of Johnson (first published in 1791).

One of Johnson’s oft-quoted quips comes from the entry Boswell wrote on September 19, 1777.

It’s a great bit of literal gallows humor that is widely cited in the short form:

"When a man knows he is to be hanged...it concentrates his mind wonderfully."

Johnson made the remark in reference to an Anglican clergyman named William Dodd.

Dodd, whose clerical background led people to call him Dr. Dodd, had been executed by hanging at England’s Tyburn prison on June 27, 1777.

The “heinous” crime he was guilty of was a loan scam.

He had asked a money lender for a sizeable loan that he claimed was for his former student, the 5th Earl of Chesterfield. 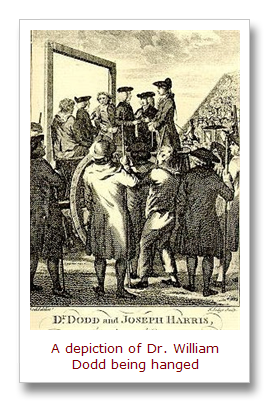 That particular young gent was son of the 4th Earl of Chesterfield, Philip Dormer Stanhope, known for those famous windy letters to his son that included platitudes like: “Take care of the minutes: for the hours will take care of themselves.”

Dodd didn’t actually give the money to Stanhope’s son. He pocketed it. And, when he failed to repay the loan, he was taken to court by the money lender, tried, convicted and sentenced to death.

Even in those days, when capital punishment was common in England, some people thought Dodd’s sentence seemed a bit harsh. One of them was Samuel Johnson.

Johnson tried to stop the hanging with a little scam of his own.

He penned an eloquent plea for mercy, full of Biblical quotes, and had it delivered to the court. Instead of signing it himself, Johnson made it seem as if it were a letter written by Dodd.

Unfortunately for Dodd, it didn’t work. He was hanged anyway, alongside another criminal named Joseph Harris.

The entreaty Johnson had ghost-written was “leaked” and soon published under the title The Convict’s Address to His Unhappy Brethren. It was credited to Dodd on the cover and became quite popular.

In his journal entry for September 19, 1777, Boswell noted that a friend of Johnson’s told the great man he suspected Dodd didn’t actually write the letter himself. It just seemed a bit too well written.

Johnson didn’t fess up at the time. But his response, as recorded in Boswell’s journal and published in the Life of Johnson, includes the memorable quote about hanging that appears on many websites and in many books of quotations:

“Why should you think so?” responded Johnson. “Depend upon it, Sir, when a man knows he is to be hanged in a fortnight, it concentrates his mind wonderfully.”

Eventually, Johnson’s authorship was revealed and The Convict’s Address is now generally – and properly – credited to him.

By the way, my favorite edition of Boswell's Life of Johnson is the “Classix Comix” version. It's edited with illuminating notes by writer Dan Leo, author of the mindbending series of novels about bohemian poet Arnold Schnabel (RAILROAD TO TRAIN HEAVEN, THIS WORLD OR ANY OTHER WORLD, and THE BRAWNY EMBRACES). It’s also wonderfully illustrated by digital artist and writer Rhoda Penmarq, who has published her own series of books collecting her witty stories and artwork on Lulu.

(creator of the great Railroad Train to Heaven online novel).