“Why are you not here?” – Thoreau’s famous (apocryphal) question to Emerson... 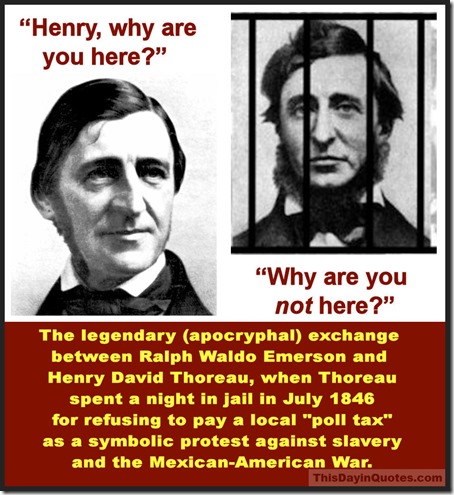 Fake quotes are sometimes harder to identify and debunk than “fake news,” especially when they are cited by hundreds of books and thousands of websites.

A good example is the question Henry David Thoreau supposedly asked his friend Ralph Waldo Emerson in July 1846 when Thoreau was jailed overnight in Concord, Massachusetts for refusing to pay the local “poll tax,” as a protest against slavery and/or the Mexican-American War.

According to the oft-told story, Emerson visited Thoreau in jail and asked why he was there.

Thoreau purportedly responded: “Why are you not here?”

This legendary jailhouse meeting and Thoreau’s legendary zinger are exactly that – legend, not fact. But the facts about Thoreau’s night in jail are not easy to pin down.

Possibly both dates apply, since he was arrested during the day, stayed in jail one night, and was released the following morning after someone anonymously paid the tax for him.

Some versions of the story say Thoreau refused to pay the tax to protest the Mexican-American War, which had begun a few months earlier. Others say he was protesting slavery.

Again, my guess is that it could have been both.

The war started in part because Americans in the then Mexican-owned region of Texas opposed Mexico’s law prohibiting slavery. They wanted Texas to be annexed by the U.S. as slave-holding territory and eventually a slave state.

So, there was a link between the two issues.

On January 26, 1848, Thoreau mentioned his night in jail in an address to a group of local intellectuals called the Concord Lyceum.

The speech, originally titled “The Rights and Duties of the Individual in Relation to Government,” was first published with a few tweaks in 1849 under the title “Resistance to Civil Government.”

It later came to be known and reprinted after Thoreau’s death as “Civil Disobedience.”

In that influential work (which includes the famous quotation “That government is best which governs least”), Thoreau’s explanation for his refusal to pay the poll tax seems to refer to slavery, war and general principle:

“It is for no particular item in the tax bill that I refuse to pay it. I simply wish to refuse allegiance to the State, to withdraw and stand aloof from it effectually. I do not care to trace the course of my dollar, if I could, till it buys a man, or a musket to shoot one with—the dollar is innocent—but I am concerned to trace the effects of my allegiance. In fact, I quietly declare war with the State, after my fashion…”

He added an oddly hypocritical ending to that high-minded declaration: “...though I will still make use and get what advantages of her [i.e., the State] I can, as is usual in such cases.”

In a mention of his night in jail in the book Walden, published in 1854, Thoreau wrote:

“I did not pay a tax to, or recognize the authority of, the State which buys and sells men, women, and children, like cattle, at the door of its senate-house.”

Thoreau’s non-payment of the poll tax as a political statement seems to have been inspired by his friend, writer, educator and abolitionist Bronson Alcott.

In 1843, Alcott refused to pay the poll tax, as a symbolic protest against slavery. As a sort of symbolic punishment, the local sheriff put Alcott in jail for a couple of hours until someone (possibly his wife) paid the tax for him.

After hearing of Alcott’s protest, Thoreau began refusing to pay the poll tax.

Three years later, Concord Constable Sam Staples stopped Thoreau on the street on either July 23 or July 24, 1846 and urged him to pay up.

According to an article in the August 1975 issue of the venerable history magazine American Heritage, Staples even offered to loan Thoreau the money.

Thoreau wasn’t wealthy, but the bill didn’t amount to much. The annual poll tax, which was supposed to be paid by male citizens between the ages of 21 and 70, was $1.50, or about $40 in today’s dollars.


Thoreau told Staples he was still refusing to pay. It’s not clear whether the reason he gave at the time was to protest slavery or the Mexican-American War or both. 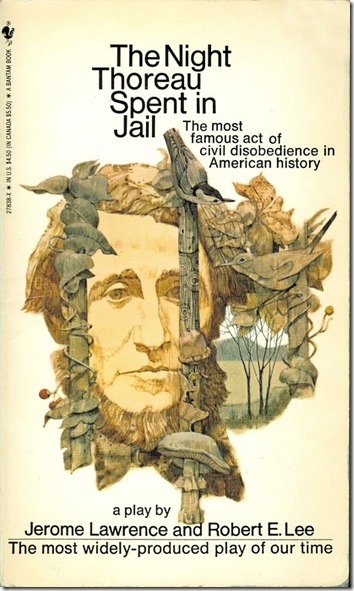 Either way, it was simply a symbolic gesture. The poll tax supported city services, not the state or federal government, and it had no real financial connection to slavery or the Mexican-American War.

Thoreau’s willingness to go to jail for his political views is generally portrayed as an inspiring and brave act. Undeniably, it has inspired many people, including Mohandas Gandhi and Martin Luther King, Jr.

However, researchers who have looked into the poll tax law have said that, while it could be enforced by seizing property in lieu of payment, it’s questionable whether non-payment would have been — or legally could have been — punished with a lengthy jail sentence.

At any rate, it is true that Thoreau spent one night in jail for his principled act of tax evasion.

He was released the next day after someone (probably his aunt Maria Thoreau) paid the tax for him.

Thoreau argued that since he didn’t personally pay the tax, he had a “right” to remain in locked up. Staples disagreed and made him leave.

According to legend, while Thoreau was in the Concord jail, his friend, fellow writer and social commentator Ralph Waldo Emerson, came to visit him and said “Henry, why are you here?” or “Henry, I am sorry to find you here.”

The most famous version of Thoreau’s response is “Why are you not here?” (with emphasis on not.)

Thoreau’s line is also given as “Why are you not here also?” or “Waldo, why are you NOT here?” or “What are you doing OUT of jail?”

The story of this exchange appears to have been made up after Thoreau died in 1862.

As noted by Yale Law School librarian and scholar Fred R. Shapiro, editor of the authoritative Yale Book of Quotations, there is no evidence that Emerson visited Thoreau in jail. And, Emerson is unlikely to have asked the question he supposedly asked since he’d have known why Thoreau was in jail.

Moreover, although Thoreau and Emerson recorded in detail the things they did and said, in their essays, journals, letters and books — and Thoreau wrote about his night in jail in Walden and “Civil Disobedience” — neither wrote anything about such a visit.

Shapiro and language maven Barry Popik have traced the first known version of the legend to an article published in the Christian Examiner in July 1865, three years after Thoreau’s death.

Popik’s post about the mythical exchange on his website documents several other versions of the story in newspaper and magazine articles published after that in the 1800s.

Since then, versions of the story have been included in many biographies of Thoreau and history books, typically cited as if Emerson’s visit and Henry’s zinger of a reply to Waldo were historical facts.

In 1969, during the Vietnam War, the legend was further enshrined in popular culture by the widely-produced anti-war play The Night Thoreau Spent in Jail, written by Robert E. Lee and Jerome Lawrence.

In the play, Emerson says “Henry! Henry! What are you doing in jail?”

Thoreau responds, “Waldo! What are you doing out of jail?”

After 1846, the real life Thoreau continued to refuse to pay his poll tax. In the 1849 printing of “Civil Disobedience” he said proudly: “I have paid no poll tax for six years.”

Apparently, Constable Staples gave Thoreau a pass after his one famed night in jail, or maybe Aunt Maria kept paying the tax for him, since he didn’t end up in jail for non-payment after that.