“There, but for the grace of God, goes John Bradford.” 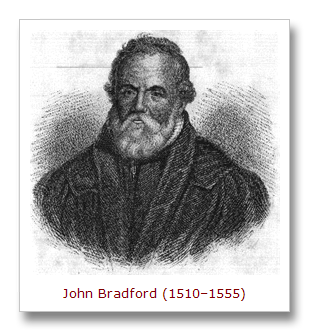 It is often claimed that the familiar expression of compassion “There, but for the grace of God, go I” is based on a quote by the 16th Century English Protestant clergyman John Bradford.

According to tradition, Bradford was a prisoner in the Tower of London when he said it.

He had previously been a prominent supporter of the religious reforms imposed by King Edward VI, which essentially banned Catholicism in England and established the Protestant Church of England as the country’s official religion.

Part of this “reformation” involved jailing or executing Catholic clergymen who weren’t willing to go along with the change.

After Edward died in 1553, Mary I (a.k.a. “Bloody Mary” Tudor) took the throne in England and forcefully reimposed Catholicism.

That involved jailing or executing Protestant clergymen who weren’t willing to go along with the change.

One of them was John Bradford, who refused to acknowledge the authority of the Pope and was convicted of “trying to stir up a mob.”

Queen Mary had Bradford locked up in the Tower of London with other notable Protestant leaders, such as Archbishop Thomas Cranmer.

One day while there, legend has it, Bradford looked down and saw a criminal being led to execution. (In some versions of the story, it’s a group of criminals.) 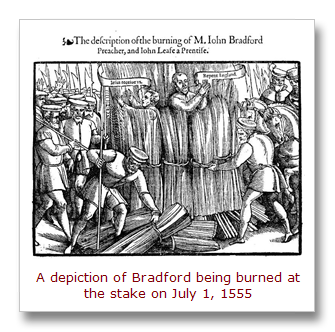 Simultaneously feeling compassion for the criminal and relief that he was better off, Bradford allegedly uttered the famous quotation “There, but for the grace of God, goes John Bradford.”

This quote has long been cited as the origin of the proverbial saying “There but for the grace of God go I.”

This was memorably modernized as “There but for fortune go you or I” by Sixties folksinger Phil Ochs, in his much-covered song “There But for Fortune.”

It should be noted that modern quote and phrase sleuths have been unable to find any documentation that Bradford actually said anything like the quote he’s alleged to have said.

The traditional story of Bradford’s famous quotation appears to come from biographies written about him in the 1800s, centuries after he was dead.

There’s no record of such a quote in historical records from Bradford’s own time and no such words in his writings.

The association this questionable quote has with the date July 1 is ironic.

The usual explanation of the quote’s meaning is that Bradford was expressing sympathy for the soon-to-be-executed criminal (or criminals) and suggesting that, except for God’s mercy, he might be sharing the same fate.

As it turned out, Bradford’s final fate actually was the same. Maybe worse, depending on how the criminal(s) got snuffed.