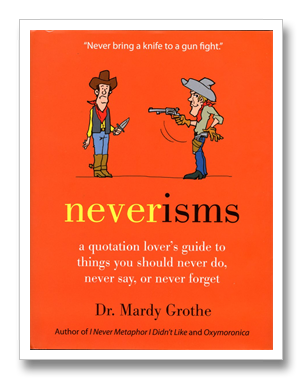 Every once in a while, I depart from the usual format of this blog to tell readers about new books of quotations that I particularly like and personally recommend.

Today’s post is about one of those books — Neverisms: A Quotation Lover's Guide to Things You Should Never Do, Never Say, or Never Forget

Neverisms is the latest in a series of books about quotations by quote maven, psychologist and management consultant Dr. Mardy Grothe

Previous books in the series include:
• Ifferisms: An Anthology of Aphorisms That Begin with the Word “IF” (2009);
• I Never Metaphor I Didn’t Like: A Comprehensive Compilation of History’s Greatest Analogies, Metaphors, and Similes (2008);
• Viva la Repartee: Clever Comebacks and Witty Retorts from History's Great Wits and Wordsmiths (2005); and
• Oxymoronica: Paradoxical Wit & Wisdom From History's Greatest Wordsmiths (2004)

As those titles suggest, Grothe’s approach to books of quotations is clever, unique and entertaining.

Neverisms is no exception. It’s a one-of-a-kind collection of quotes, illuminated with background written by Grothe, that’s simultaneously fun to read and educational, often humorous and sometimes quite thought-provoking.

Like Grothe’s previous books, Neverisms includes quotations related to the book’s topic. In this case, as the subtitle indicates, the topic is quotes about “Things You Should Never Do, Never Say, or Never Forget,”

Grothe coined the term neverisms as a short (and memorable) term for such quotes. His new book collects and discusses more than 2,000 neverism quotations by nearly as many people, from every era of history and every walk of life.

The quotes are organized into chapters based on some aspect they have in common. Sometimes it’s a topic, such as sex, sports, politics or business. In other cases, it’s a linguistic similarity, such as quotes beginning with a certain phrase, like “never underestimate” or “never trust.”

Each chapter includes interesting introductory comments and fascinating “back stories” about the quotes written by Grothe.

This approach, which Grothe has used in his previous books, makes Neverisms hard to pigeonhole. It’s a great compilation of quotes, but it’s much more than just a compilation. It’s educational, but not at all dry. It’s fun reading — and you’re guaranteed to learn a lot of facts you didn’t know about a lot people and subjects. 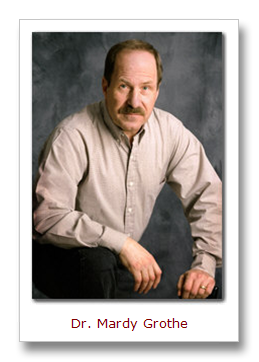 For example, here are a couple of entries from the Stage & Screen chapter of Neverisms:

Never confuse the improbable with the impossible: “Burke’s Law.”
GENE BARRY, as Captain Amos Burke, in a
1963 episode of the TV series Burke’s Law

In this popular 1960s television series, Gene Barry played a dapper Los Angeles millionaire who had been named chief of detectives for the L.A. Police Department. As he fought crime from his chauffeur-driven Rolls Royce Silver Cloud, Burke was famous for dispensing proverbial sayings to his young detectives, always ending them in his trademark manner: “Burke's Law.” The series also included these neverisms:

Never walk away from a long shot.
Never call your captain unless it’s murder.
Never drink martinis with beautiful suspects.
Never give your girl and dog the same kind of jewelry.

This is the reply that business executive Linus Larrabee (Bogart) makes to the beautiful Sabrina Fairchild (Hepburn), after she waltzes into his office and announces, “All night long I’ve had the most terrible impulse to do something.”

I’ve collected and read hundreds of books of quotations and I rate Dr. Mardy Grothe’s new book Neverisms as one of the best. I give it my highest recommendation.

If you like books of quotations, or just like reading interesting books, I’m sure you’ll enjoy Neverisms.

By the way, if you’re a quote lover, you’ll also enjoy Dr. Mardy’s free weekly newsletter. You can subscribe to it by visiting his website at drmardy.com.