“History will absolve me.” (“La historia me absolver.”) 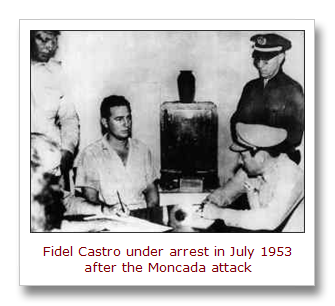 Recently, Fidel Castro generated worldwide news when he told a journalist for The Atlantic magazine that the Communist model he had imposed on Cuba “doesn't even work for us anymore.”

It was a sadly ironic comment given the tens of thousands of deaths and other human suffering caused by Castro’s efforts to create and maintain his Communist regime.

Yet, somehow I suspect “El Jefe” would still stand behind the famous quote he uttered 57 years ago on this date:

“History will absolve me.” (“La historia me absolver.”)

Castro made this claim on October 16, 1953. They were the final words of a long speech he gave at the end of his trial for leading the attack on the Moncada barracks on July 26th of that year.

The Moncada attack was an attempt to start a revolution against Fulgencio Batista, the longtime Cuban dictator who had run Cuba largely to benefit himself, the Cuban elite, big international corporations and the American mobsters who controlled most of the island’s popular hotels, nightclubs and casinos.

The attempted coup failed. Seventy of the rebels involved were killed during the attack, or later. Others, including Castro, were captured by Batista’s soldiers.

Fidel and his surviving co-conspirators (which included his brother Raul) were put on trial in September. At first, the proceedings were open to the press and public. But the publicity generated more sympathy and support for Castro and his fellow rebels than for Batista. As a result, Batista ordered the final stages of the trial to be held in secret. 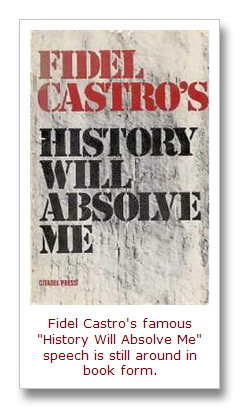 In his last statement to the court on October 16th, Castro delivered an amazing four-hour speech. He reviewed details of the Moncada attack, the political crimes and failures of Batista’s regime, the dismal conditions in which most Cubans lived and the legal and historical justification for rebellion against tyrants. He also outlined his vision for a future “revolutionary government” that would provide jobs, decent housing, health care and education to all Cubans.

He ended the speech, by saying:

“I do not fear the fury of the miserable tyrant who took the lives of 70 of my comrades. Condemn me. It does not matter. History will absolve me.”

There was no record of this speech at the time, since the press and public were excluded. And, as Castro expected, his words had no real effect on the decision of the judges. They found him guilty.

But the publicity the trial had generated made Batista fearful of having Castro executed. So, instead, the court sentenced him to 15 years in prison.

For Batista — and, depending on your viewpoint, for many other people — this turned out to be a huge mistake.

In 1955, faced with international pressure, Batista freed Fidel and exiled him from Cuba.

Fidel and brother Raul went to Mexico. There, with Ernesto “Che” Guevara and other followers, they planned the Cuban Revolution.

They called it the 26th of July Movement, in honor of the attack on the Moncada barracks.

To guide the movement, Castro reconstructed the speech he made at the end of his trial in 1953. It became the manifesto of the Cuban Revolution and well known to Communists elsewhere during the Cold War era as “the ‘History Will Absolve Me’ speech.”

In November of 1956, the Castro brothers and Che returned to Cuba. Their fast-growing 26th of July Movement mounted a guerilla war against the Batista government. By the beginning of 1959, Batista fled the country and Fidel Castro began what would become his own long dictatorship.

Whether historians of the future will, in fact, absolve Fidel for the results of the Cuban Revolution remains to be seen.