The story behind the phrase “The Year of Living Dangerously” 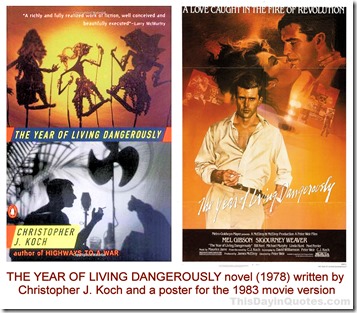 Google has a cool tool for researchers of words and phrases (including quotations) called the Ngram Viewer.

It graphs the occurrence of a word or phrase in books published between the years 1500 and 2008.

If you do an Ngram search for the phrase “the year of living dangerously,” you’ll see a huge, continuing spike starting in the early 1980s.

That’s because it gained major worldwide popularity with the release of the ‘80s film The Year of Living Dangerously.

It was initially given a limited released in the United States on January 21, 1983, then released nationwide here on February 18, 1983.

The Year of Living Dangerously is one of my own favorite romantic adventure films.

Depsite how much I liked it then and now, The Year of Living Dangerously was only a modest hit at the box office. (It grossed a mere $10.3 million during it’s run in U.S. theaters.)

However, the movie’s title became a huge linguistic hit as a catchphrase that has become embedded in our language and spawned many variations.

Indeed, if you Google “the year of living *” -dangerously (using Boolean search techniques to look for versions of the phrase that don’t include the word dangerously), you’ll see thousands of different variations.

A few examples include:

Although the movie made “the year of living dangerously” a widely-known catchphrase, it’s not the origin.

Nor is the 1978 novel The Year of Living Dangerously by Christopher J. Koch, which the film version is based on.

The setting for the book and movie is Jakarta, Indonesia during the chaotic period that led to the overthrow of the country’s long-time dictator, President Sukarno.

Author Koch took his title from a speech Sukarno made in 1964. 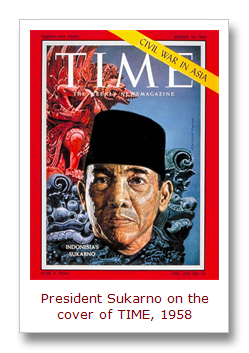 The President had a custom of giving a special name to each year in his annual “National Day” speech.

In the National Day speech he gave on August 17, 1964, Sukarno named the upcoming year “the year of living dangerously.”

This reflected the challenges he knew he faced from his political enemies, who included both hard-line Communists and radical Muslims.

The multilingual leader’s name for the year was based partly on an old Italian phrase he was familiar with — “vivere pericoloso” (“living dangerously”).

Although Sukarno gave the speech in the Indonesian language, he inserted those Italian words after the Indonesian word for year, tahun, to create the name.

The year ahead, he said, would be the “Tahun vivere pericoloso.”

The Google Ngram for “the year of living dangerously” suggests that it first appeared in English-language books around the time Sukarno gave his 1964 National Day address.

Some sources credit him with coining it and, based on what I know at this point, I think he probably did.

Either way, his choice of the name for the coming year certainly turned out to be prophetic.

In September of 1965, a bloody coup began that led to his overthrow.

Hundreds of thousands of Indonesians were killed in the power struggle. Sukarno survived and was allowed to live out the rest of his days under “house arrest,” until his death in Jakarta on June 21, 1970.

His phrase “the year of living dangerously” and its numerous linguistic offspring live on.